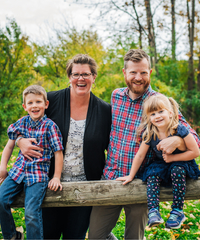 Luke and his wife, Kate, have been a part of the Webster Community Church family since they were married in 2003.  Luke came on as staff in a part time position as a youth and music coordinator in 2005 and several years later, became full-time associate pastor with a focus on youth ministry and worship service.  As of September 2020, his role has been adjusted, no longer including youth ministry.  Instead, he currently has increased preaching and pastoral care responsibilities and is meeting administration needs for an interim period while the church searches for a new lead pastor.

Luke grew up in Washington State with a family that had strong emphasis on faith in Christ, and came to faith himself at a young age.  He moved to Sexsmith, AB in 2000 to attend Peace River Bible Institute where he earned his Bachelors of Religious Education.  In addition to receiving his degree, he also met his wife at PRBI.  They have remained in Sexsmith since and now have two children.